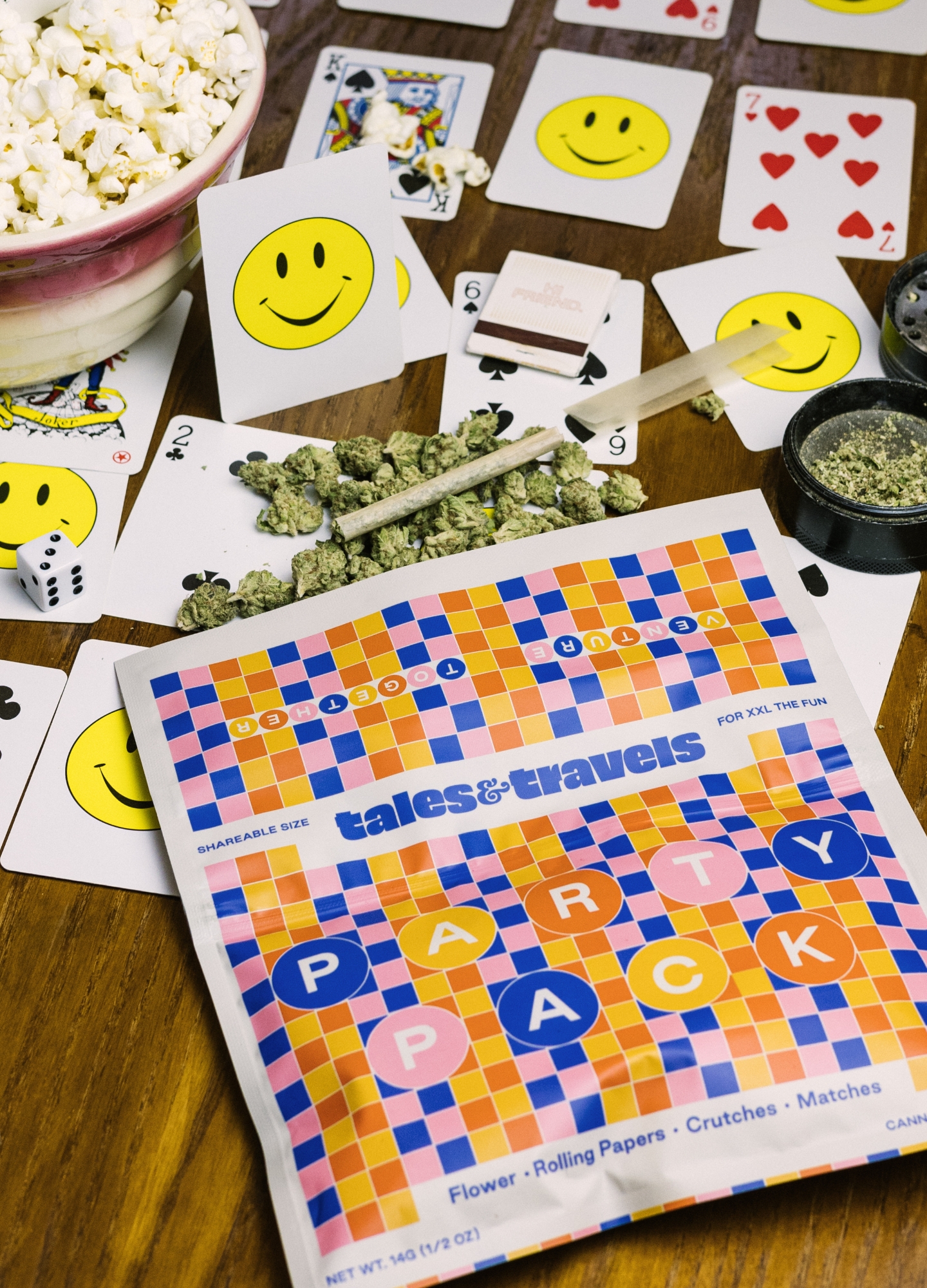 Last month, we introduced the newest addition to the T&T lineup: Party Pack. Featuring your favorite T&T strains in our new Little Buds, and now in our largest bag for XXL the fun. Each Party Pack comes with T&T Little Buds (duh), rolling papers, crutches and matches — everything you need for a party (because a party is just a good time but bigger).

And because you can't have a party without tunes, we tapped Chicago-based indie rock band Motel Breakfast to make us the ultimate party playlist. Read on for their playlist inspiration, party essentials, and go-to spots around the city.

‍What was the vibe you had in mind when you were making the Party Pack playlist?‍

We wanted something that struck a balance between perfect background music and something to groove to. Our favorite way to enjoy a party centers around the people with us, so anything that allows us to enjoy friends' company to the fullest is what we’re looking for. It’s a mix of genres, but everything has an upbeat tempo. Nothing should jump out too much or interrupt the party, but each song will keep the night moving along.

Are there any songs on the Party Pack playlist that are your go-to party songs?‍

LCD Soundsystem songs are staples for any mix we are putting together. We went with their newest song here instead of relying on the classics. "Oysters In My Pocket" by Royel Otis has been on repeat for all of us this year. It's one of our top tracks of 2022 so it just had to be included. Most of these songs came out in the last couple of years, so many of them have been recent go-tos.

What does a night out with Motel Breakfast look like? Any go-to spots in the city?‍

Mick, Jim, and Jess all live together in Ukranian Village, so many nights out with the band start at their apartment and move on from there. Our go to spots are Star Bar, Sportsmans, and Easy Bar on Division. Anywhere that has cheap beer, a pool table, and some sort of patio is where you could usually find us in the city.

‍What are your party essentials?‍

Music would be the first thing. If it isn't a playlist like this one, music videos on the nearest TV is a must at a house party. A good Whiskey Ginger is our collective go-to drink outside of Miller High Life. The off-the-wall answer is Stick N Poke tattoos. We have a habit of giving each other tattoos when we are having friends over at one of our places. Are any of us tattoo artists? Absolutely not. ‍

If you could throw a party with any three Chicago-based artists as the headliners, who would they be?‍

Ric Wilson is one for sure. Few people in Chicago know how to work a crowd like him and his band. Grapetooth is the next obvious answer for us. If you have ever been to a show of theirs, you understand. It's one of a kind. Our last pick would be Divino Nino. Another band that just consistently puts on fun shows.

A little bit more about our friends Motel Breakfast:

Comprised of Conor Brennan (keys), Drue deVente (bass, vocals), Jimmy Drenovsky (guitar, vocals), Jesse Nasadowski (drums, vocals), and Mick O'Donnell (guitar), Motel Breakfast has garnered a devoted regional fanbase since forming in 2017. Most recently in August 2022, the band performed a session at the legendary Audiotree studios and headlined a sold-out hometown show at Chicago’s Lincoln Hall. Their latest single is “MB (as in Modern Baseball),” was recorded in Chicago with producer R. Andrew Humphrey (known for his work with Twin Peaks, Calpurnia, and Sun Cop). Check out their upcoming shows here to make them your IRL friends, too. ☺️

Are you at least 21?
Yes
No
By clicking "Yes" I agree to Revolution Cannabis's Privacy Policy.
Sorry, you must
be 21 to enter.